The Chattri Memorial, The first Gurkha Commemoration site in the United Kingdom.

The Memorial to the Brigade of Gurkhas, London.

Cologne Southern Cemetery and A short account of the 2/8th Gurkha Rifles on the Western Front in the Great War, 1914-1915.

The Gurkha Graves of Berlin, Part 1.

The Gurkha Graves of Berlin, Part 2; With the 2/7th Gurkha Rifles into World War 2 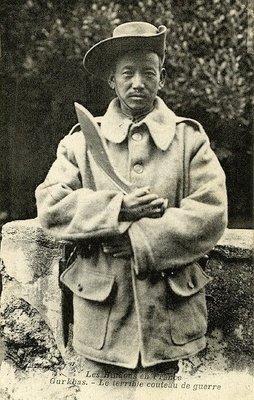 From the Western Front to Eastern Europe, the Gurkhas of “Halbmondlager” (WW1 POW Camp). (Part 2).

A Gurkha in the Kaiser´s backyard – Rifleman Haribal Thapa on the Western Front & German POW Camp 1914-1915.

The astonishing history of a 200-year-old British-Gurkha friendship.

Who are the Gurkhas and what is their contribution to military history?

The Gurkhas – In Honour of the Gurkha Soldiers, celebrating 200 years of service to the British Crown –

G200 – 200th Anniversary of the Gurkhas Service to the Crown.

Time line from the Gurkha Welfare Trust (UK) which we strongly encourage our readers and followers to support!

1969: The Gurkha Welfare Trust is founded

The word “Gorkhali” was used by the military of Gorkha King as they expanded and conquered the area that became Nepal in the late 18th century. Therefore “Gurkha” and “Gorkha” are a corruption of the word “Gorkhali” and came to be used form the mid 19th century onwards in the colonial British-Indian army. The early Gorkhalis that we will find out more about here are the forebearers of the Gurkha/Gorkha soldiers and share the same history until 1815. The year 1815 was the year the British East India Company (BEIC) started recruiting Gorkhalis into their military.

In 1858 the British Crown replaced the BEIC as “administrators” of India and in 1947 the ten Gurkha regiments of the Indian Army were divded between Great Britain and independent India. In that we often forget the role the Nepalese Army played as the forebearers of the Gorkhali army. The history of the Gurkhas/Gorkhas would not be complete unless we accept a common past and examine all three as they have since 1947 developed independently. This page is about the Gurkhas of the British Army and earlier British East India Company, the following page on the Gorkhas of the Indian Army and the page titled National Museum of Nepal about the common heritage shared as Gorkhalis.

Men have throughout history sought service with various powerful rulers, offering their martial skills for employment. It was not uncommon that martial men sought employment outside the area they were born in and the practise of offering their services rather normal and not thought of as a negative issue then. Mercenary in the modern world often comes with a negative tone but in history it was often a means of survival based on a skill you held and a life line of survival. In no way do I intend to call the modern Gurkhas/Gorkhas for mercenaries as that would be a large error and a mis-conception of the terms of service, but mean only as a general trend prior to the idea of modern nation states, let that be clear. It should perhaps be added that to take up arms for employment far away from home was not a unusall idea in the early days of Nepals making and still is not.

“The Almighty created in the Gurkha an ideal infantryman, indeed an ideal rifleman, brave, patient, adaptable, skilled in field-craft, intensely proud of his military record and unswerving loyalty. Add to this honesty in word and deed, his parade perfection, and his unquenchable cheerfulness….” – Field Marshal William “Bill” Slim (served with 6 GR and commanded 2/7 GR).